Working for film, radio, podcasts and other media presents enjoyable challenges. Each medium requires different skills of narrative and visualisation to make the stories sing as audio, images or both.

I've had many different roles in broadcast media projects, from scientific adviser and interviewee to presenter, film-maker, interviewer and scriptwriter. I like to work on fairly minimalist lines, choosing words with care to give them power and let visuals breathe.

My credits include presenting radio series and solo pieces for the BBC and scripts (mostly for internationally broadcast television films) for :

As a taster, here's the audio of a short script about arctic terns I wrote for Cape Farewell and Gordon Buchanan. 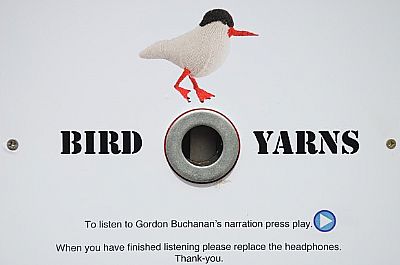 In the summer of 2013, stand-up comedian, Raymond Mearns, came to visit me on the Black Isle as part of his 'Talk on the Wildside' series for BBC Radio Scotland. The iPlayer Radio file is now offline, and I'll post the audio soon. But you can see some pictures here.

It was also great fun to renew acquaintance with Cameron McNeish to tramp up a glen in an unending downpour and talk wild land and wild nature as the cloud swirled lower and lower. This featured in part of his 2014 'On the Pilgrims' Trail' TV series (and later repeats) through Triple Echo Productions. Another intriguing broadcast was to be one of a motley trio of Inverness-linked people discussing influences of the local landscape, culture and environment on food there for a Radio 4 series 'The Town's The Menu', repeated not long ago.

Most recently, I've had an amble along the banks of the Ness in autumn 2016 to celebrate accessible nature and greenspace on Radio Scotland with Suzy Beaumont.

In the summer of 2017, it was a privilege to be able to represent the Scottish Wildlife Trust on Eigg in interviews for BBC TV and radio to welcome the 20th Anniversary of the community-linked buyout of the island.

Radio broadcasts in 2018 have included being interviewed for 'Out of Doors' on BBC Radio Scotland and 'Farming Today' and  'Costing the Earth' for Radio 4.